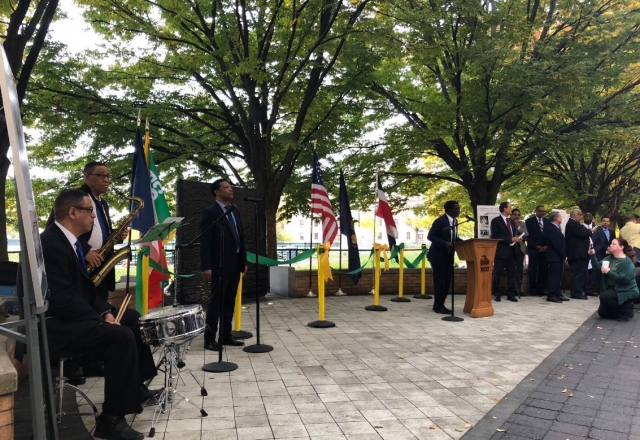 In all of the United States, there has never been a tribute to the hundreds of courageous American servicemen and servicewomen of Dominican heritage who fought for the freedom of their country and the world during World War II.

On Friday, November 2, on the campus of Bronx Community College, the ribbon was cut on the nation’s first “World War II Dominican Veterans Monument.” Beneath a thick canopy of clouds, leaders from the Bronx and the Dominican Republic hailed the new addition to the New York City landscape and the 351 heroes whose names are carved into its façade.

Following a bilingual invocation and performances of the national anthems of the United States and the Dominican Republic, the event opened with remarks from BCC President Thomas A. Isekenegbe. “Bronx Community College is a Hispanic Serving Institute,” the president noted. “Given the role that BCC plays in the Bronx and our location in University Heights, home to many in New York City’s thriving Dominican community, we are very pleased to be the site of this monument.”

Calling the monument “a gift to us all,” Vice Chancellor of The City University of New York Judy Bergtraum added “I hope that visitors from many places will come here to Bronx Community College to experience it, especially in these polarizing times when our nation is divided and our core values are threatened.”

Also on hand was New York City Council Member Fernando Cabrera, the driving force behind the monument — it was through his efforts that BCC was awarded $400,000 in state and local funding to erect the structure in front of Nichols Hall on the main campus walk.  “More than 300 Dominican men and women risked and sacrificed their lives for the United States during World War II,” observed Council Member Cabrera. “These soldiers have been largely left out of U.S. history and I believed their rightful and public recognition was long past due.”

The names inscribed on the monument, which include a Tuskegee Airman and a bronze and silver star winner, were identified through a joint effort between Bronx Community College and the Dominican Studies Institute, researched by a CUNY Dominican Studies Project called “Dominicans in New York.”

Family members of the honored men and women also spoke. “Sometimes this country forgets the power and the contributions of the immigrant people,” said Angelica Infante, the granddaughter of veteran Juan Infante, who enlisted to fight in World War II when he was almost 40. “We as Dominicans are extremely proud of our accomplishments. We are a mighty community. We too are Americans.”

“This is a proud day for all Americans whose loved ones fought bravely for our freedom,” said Dr. Gerrard P. Bushell, President and CEO of the Dormitory Authority of the State of New York (DASNY). “DASNY is pleased to honor the sacrifices so many have made for our country and construct this memorial. To display it on Bronx Community College’s beautiful campus is a privilege.”

Following the dedication, a reception was held at BCC’s Roscoe Brown Student Center, where guests were serenaded by a Bachata band and enjoyed Dominican delicacies and fond memories of those whose names are now immortalized in marble.